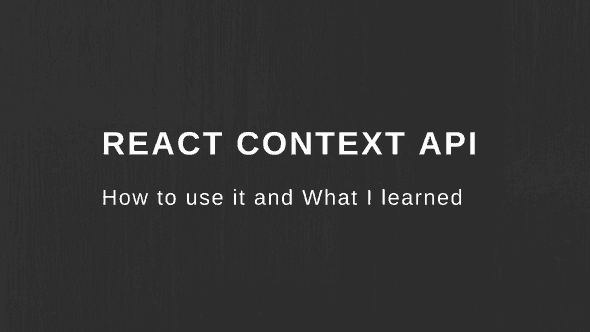 Hey Guys, this week I am going to discussing the React 16 Context API. React 16 was a huge release for react and included a bunch of new feature and improvements one of them being the new context API. I only recently started using it and it takes a bit to get your head around it. I will be discussing what I learned from using it as well as providing some examples.

What is the new context API?

Context API “provides a way to share values like (certain types of props (e.g. locale preference, UI theme)) between components without having to explicitly pass a prop through every level of the tree.” In other words, a common place where you can share values across multiple components. If you have ever used a state management library like Redux you can think of think as mostly the same concept. I should say tools like Redux will have a bunch of other features as well that may help in your bigger applications. However, I think you should see if your problem could be solved with React context API instead of jumping straight to Redux.

How is it used?

Using the context API is very simple and can be thought of in 3 steps:

Here is a link to learn more and expand on the example I used. They go into much more detail and have more examples.

What I learned from using it

This was a learning experience for me, I honestly have never used Redux, I have always tried to manage the state myself and mostly at the top level of my application. For most of my projects, this was perfectly fine, Redux would have been overkill but more recently I have been creating more and more applications that need to share parts of state across multiple components. An example of this would be a mapping application that shows markers on a map for certain locations, the application also has other menus where you can see different metrics about the city itself and the user can choose which city they wanted to view. In this case, the users selected city needed to be shared across multiple components, when the user selected a city to see more information menus/components had to change as well. In the above example, I really struggled to come with a Pure react solution to share this state so I went to look at Redux and was on twitter when I saw this post by Ken C Dotts basically saying Redux should be one of your last options you should try, Context and other statement management strategies should be tried before jumping into redux.

Then I looked into the Context API thinking for 3 or 4 bits of state Redux was overkill, after reading the docs and getting the above example working (sharing the current city across multiple components) I have learned a few things which may help you:

I hope you enjoyed my first post on Advanced React concepts, I only recently got a chance to use the new Context API was so I thought it would be better for me to start writing about what I learned as soon as I learned it. If you have any questions or comments about the post feel free to reach out on twitter: @jaythewebdev.