Welcome back, this week we are going to look at Jenkins.

Jenkins is a “continuous integration” tool that can help a team or organisation continuously test and integrate their code via pipelines, plugins and various other features. Jenkins is a tool I use every day in my job, we have pipelines that we use to deploy and test various environments. I am going to try to integrate it into an existing project TwitterClone.

Today’s tutorial we are going to create a pipeline to deploy and test our TwitterClone application which involves:

First things first let us setup Jenkins since I am using Ubuntu I went to the following link: http://pkg.jenkins-ci.org/debian-stable/ Note: there is a docker image available in which you could to setup Jenkins in docker it but I wanted to keep this tutorial simple by installing it locally. In another tutorial, we will move to have Jenkins running on a docker image.

After you have Jenkins setup navigate to localhost:8080 and you will go through the setup process using the default options should get you through. Once you get through the start-up process you will be directed to the Jenkins home page. For our project we are going to have the following: 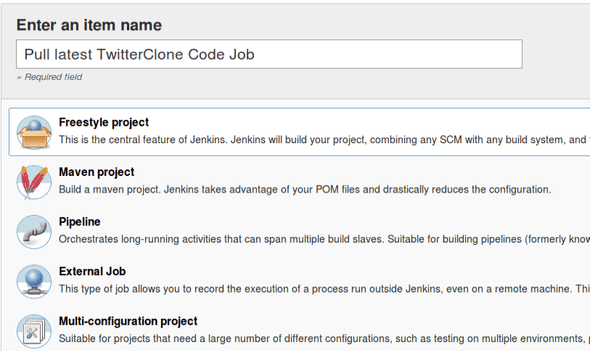 Once you have the following selected click ok which will then bring you to a config screen. This is where you define what your job is going to do for us we are only going to need to do this:

We are pointing it at our git repo and I have added the creds for my git account. You will need to click the add button beside the Credentials field and add your git username and password, once you have that setup just click save. After we have saved the job lets kick it off and give it a test by clicking the “Build Now” button on the right. 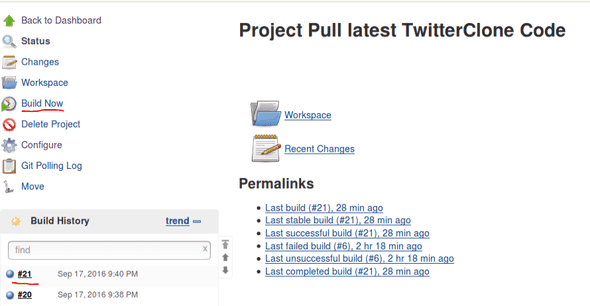 After the build is done you will see how it went in the Build History view if it’s blue it means it was successful, if it’s red it failed, you can click the build history to see the output.

Now we have a job that pulls our code from Git next we will create a job to build a docker image and deploy it to a container. First, let’s add a Dockerfile to our TwitterClone project:

This is a very boilerplate Dockerfile that we have used in previous projects, its a template for deploying NodeJS applications to docker images.

Now that we have that setup lets create a job that actually uses it. So like before on the Jenkins homepage -> new item -> Freestyle Project this time we are going to run shell commands to build a docker image and deploy it to a container here is how it is done:

So what are we doing here? Well we are executing a shell command that:

That is all we need for this job…I wouldn’t recommend running this just yet simply because if it breaks somewhere in the middle you are going to need to clean it up which is a hassle. We will deal with cleaning it up later.

Next step is to create our pipeline job so: New item -> Pipeline give it a name I picked “TwitterClone Pipeline”. Pipelines in Jenkins are useful we can use it to link a bunch of jobs or activities together and let them run one after each other.  In the UI you can link all the jobs we just created.

That is all our pipeline needs to do. Let’s save it and give it a try:

We now have our working pipeline, which pulls our latest code, builds a docker image, deploys it to a container then runs some tests and finally does cleanup. Thanks for going through this with me catch you next week!